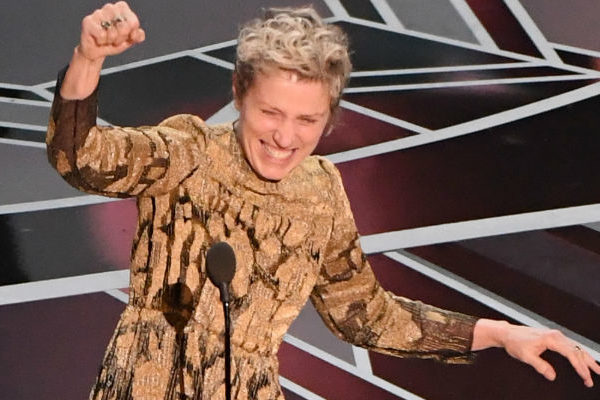 “I just found out about this last week,” McDormand said. “There has always been available, to everybody that does a negotiation on a film, an inclusion rider, which means that you can ask for and/or demand at least 50 percent diversity in not only the casting but also the crew. And so the fact that I just learned that after 35 years of being in the film business… we’re not going back. So the whole idea of women trending? No. No trending. African Americans trending? No, no trending. It changes now. And I think the inclusion rider will have something to do with that.”

The Inclusion Rider was first introduced by Stacy L. Smith, associate professor of communication at USC, with an opinion-editorial written in 2014 for the Hollywood Reporter, before talking about it in her 2016 TED Talk.

She came up with the following study she did with her colleagues. The study followed the different ethnicities and genders of the cast and crew for 900 of the most popular movies that came out between 2007 and 2017 – the results were astonishing.

Smith said that her colleagues and herself are currently working with civil rights attorney Kalpana Kotagal to craft an understanding contract negotiation for actors who wish to practice the Inclusion Rider.

The idea is that actors would have the ability, within their contracts, to demand for diversity to be reflected both through cast and crew where women, people of colour and members of the LGBTQ communities are usually underrepresented.

The inclusion rider would ensure that the world represented onscreen looks like the one that we live in.

In support of the women & men who are leading this fight, I will be adopting the Inclusion Rider for all projects produced by my company Outlier Society. I’ve been privileged to work with powerful woman & persons of color throughout my career & it’s Outlier’s mission to continue to create for talented individuals going forward. If you want to learn more about how to support the cause – link in bio. #OutlierSociety #AnnenbergInclusionInitiative

”I’ve been porivileged to work with powerful woman & persons of color throughout my career & it’s Outlier’s mission to continuate to create for talented individuals going forwards,” he wrote in his post.

View all posts by Nelly Sérandour-Amar

> felt cute, might delete later (that's what all the cool kids say right?) Last night's look for the Heartbreaker's ball 🖤🎭 I had no idea what to expect for the event but honestly had so much fun! The music was great and the people were even better tbh - they were all so welcoming and fun 🥰 however the best part on top of it all was that the club was legit two minutes walking distance from my place 😂 the up side of living downtown 🤙 . . . . . . . #masqueradeball #cute #mask #selfie #lastnightsoutfit #ootn #cluboutfit #raveoutfit #ootd #outfitofthenight #masquerade #makeup #makeupofthenight #torontonights #toronto #torontoigers #torontoclubscene #the6ix #eyeshadow #eyeshadowlooks #croptops #croptopseason #likeforlikes #l4l #f4f #picoftheday #selfie #bathroomselfie
You thought I was gonna wait til the Spring/Summer to start wearing this skirt? 😅😈💕 . . . . . . . #denimskirt #jeanskirt #jeans #cute #winteroutfit #winterfashion #winter2019 #FashionDiaries #fashionista #fashiontrends #fashiongram #stylegram #styleinspo #styleoftheday #ootd #cuteoutfit #outfitinspiration #winteroutfits #torontofashion #torontostyle #picoftheday #potd #bathroomselfie #l4l #likeforlikes #f4f
Random selfie from last summer but I thought I looked cool in it so here you go🤙💞☀️ . . . . . . . #summer2019 #summerthrowback #summerootd #summeroutfits #makeup #makeupandhair #longhairdontcare #wavyhair #wavyhairstyle #eyeliner #cateyes #selfie #selfies #torontogirl #torontoigers #yyz #the6ix #thowback #picoftheday #makeupoftheday #potd #likeforlikes #l4l #f4f #sunset #goldenhour
Yesterday was a pretty special day for me, it's been exactly a year since I started working at @ciebirthright and what a year it's been! This journey obviously started when I went on my trip back in May 2018 which was probably one of the coolest experience of my life. Being introduced to Jewish life wasn't new to me, I've always been involved with my community since a young age. However, the trip was the first time where I could be completely myself in a Jewish/community environment. I didn't hide from who I was or what I believed truly. I was there for the right reasons and felt like I discovered more of myself than ever before. Once the trip ended I was trying to figure out how I wanted to start my career and after some ups and downs, I decided to simply follow my heart and apply for a simple entry level job with CIE. And honestly, this was the best decision I made. From day one I was welcomed and appreciated and felt part of the team which now has honestly become a family to me. I feel like I grew professionally fast in this environment and I am so grateful for all of the opportunities that I got to experience this year. Yes, there's ups and downs just like anywhere else but I truly love working there where I can honestly say that I am 100% myself doing something I 100% love doing. Now, I'm currently in the MIT program and I will get to lead my own Birthright trip this year and hopefully guide and inspire participants of the Summer 2020 season which I'm so excited about!!! If you want to join me on this adventure, don't waste your time and apply on the website NOW! (Link in bio 💞) Anyways, happy one year to me, I'm happy and I'll be even happier if you apply on a trip!!!😍🥰
(i feel like she's gonna kill me for posting this pic but wtvr 🤷🏻‍♀️) Just wanna say I'm super proud of my super smart bestie for landing a kick-ass job with the Montreal Heart Institute! I don't really understand what you do but you seem to be a rockstar in your field sooo 👏👏👏 anyways, love ya, you're great and I miss these summer nights at Julep filled with poutines + Ice Cream 😍😩 . . . . . . . #selfie #selfies #bestfriends #besties #funnyselfie #summernights #wcw #proudbestie #proudfriend #happy #cute #brunettesdoitbetter #brunettes #throwback #flashback #waybackwednesday #humpday #makeupcommunity #montreal #mtlmoments #mtl #514 #orangejulep #summer2019 #likeforlikes #l4l #f4f
I know I already posted this on my story but this is me 99.9999999% of the time when a) I'm out with my friends being extra or b) any songs by Ariana Grande comes out lol 🤷🏻‍♀️ Anyways dancing is fun and the idea of dancing like nobody's watching is something that I stand by 100%! Thinking this way has boosted my confidence in so many ways and therefore helps with my mental health actually! I highly recommend thinking this way next time you go out dancing 🎉🖤 . . . . . . . #dance #dancingvideo #dancevideo #igdancers #nyc #newyorkgram #arianagrandemusic #arianagrande #breakfree #happy #positivity #mentalhealth #mentalhealthawareness #dancingqueen #happiness #happinessisachoice #goodvibes #funvibes #nycnightlife #newyorkcitylife #clubbing #torontogirl #torontoigers #l4l #f4f
%d bloggers like this: